A work in Progress

It becomes more and more apparent each year that the historical frameworks governing copyrights and patents in this country (if not the world) has become strained under advances in modern technology, and particularly, the internet. The digital millennium has changed the face of content creation, distribution, and consumption to such a degree that legislation governing copyright, infringement, and plagiarism can scarcely keep up. 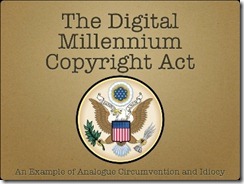 One of the principal tools in use today in the United States is the Digital Millennium Copyright Act (DMCA), passed into law in October of 1998. We are all at least somewhat familiar with the Digital Millennium Copyright Act. At least, we know it has to do with “protecting” copyrighted works online, and that it allows online content to be “removed with” the simple issuance of a “takedown” notice by the party alleging infringement, usually to the hosting entity.

In broad strokes, the DCMA requires that, upon receipt of an infringement notice, the Internet Service provider or hosting site must block or remove public access to the alleged infringing material in order to be protected from liability under “safe harbor” rules built into the DMCA. In the meantime, the content host generally notifies the user or customer who posted the content, who is then free to file a counter-notice establishing that the content does not, in fact, infringe as claimed.

The above description is intentionally broad and vague, because I am not an expert in copyright or the DMCA. In addition, more detailed information abounds online. You can start HERE if you want more information. In short, the DMCA was a step forward in that it established explicit measures protecting internet service providers and content hosting sites from being held liable for infringing content uploaded by users.

Big Media, for the Takedown

I am proposing that the DMCA has potential to be a reasonable compromise in terms of bringing copyright enforcement kicking and screaming into the modern age (ok, at least to the eighties or nineties). The problem at present is that, like many things, the current implementation is one-sided in the extreme, unduly favoring the plaintiff, which is most often a heavily-lawyered, well-healed large corporation. Essentially, all one need do to get somebody’s content blocked, even temporarily, is issue the takedown notice. It then becomes the problem of the content publisher to demonstrate that the posted content does not, in fact, infringe upon the plaintiff’s work.

Certain major media companies have taken to issuing indiscriminant take down notices, apparently using internet search algorithms and “web crawling” technology to identify potentially infringing content. In some cases, it appears that content is targeted based upon keywords, titles, or other criteria which may well identify infringing works, but also a good many other sites which are not in fact plagiarizing or pirating the work of others. Often acting through surrogates, big media companies seem to favor a shoot first, ask questions later approach, issuing the take down notices indiscriminately. The current law provides no penalty for this, and the result is that, if YOUR content happens to contain the right combination of keywords, your content might be yanked, pending resolution through a counter notice.

Balancing the Equation – a Common-Sense Solution

I propose that the DMCA be modified to penalize those who issue a takedown notice which turns out to be invalid. If someone is going to claim MY content infringes upon their previously published work, they should be damn sure that it does if they are going to step on my livelihood. Just as in civil court, if I sue you, and I lose, I will be required to pay your attorney’s fees and other legal costs. Under the modification I propose, at the very least, those who are found to have issued a bogus or insufficiently researched takedown notice should have to pay for my costs to get my content restored, plus any lost revenue arising from the period during which my content was off line. Other penalties should also be levied, since at present, there seems to be no mechanism to regulate the profligate issuance of these takedown notices in a slash-and-burn manner by big media companies.

I am very much against plagiarism and piracy. I think that those who seek to profit by illegally distributing copyrighted materials, and/or through plagiarism, should be punished accordingly. But I don’t feel that the laws by which this is accomplished are balanced fairly at the moment, and the situation is skewed too far in the direction of the big publishers.

Don’t steal. Don’t plagiarize. And don’t throw out the baby with the bathwater.

We can do better.