SOPA and PIPA are only the beginning . . .

We all knew it would happen. Back in the ’90s, Big media came late to the internet game. For most if its history, the internet has been (rightfully) held as a free exchange of ideas and information, with very little interference from government, at least in the Democratic West.

Now, in the last decade Big Media has taken notice. With the effective monetization of the web, Corporations have now moved into “our” space. The impact can be felt in the form of new regulations proposed, on a regular basis, with the aim of restricting the freedoms of the average internet user in a manner which benefits Big Media.

Prior to the evolution of profitable business models for on-line commerce, the big boys really had little interest in “our” space, and the profiteers in the US Senate and the House of Congress were less than interested in the internet. In the last ten years, however, that has begun to change, and in the last two, things have reached a critical mass. While big business was slow to catch on for the first decade of the internet, the sleeping giant is stirring . . . 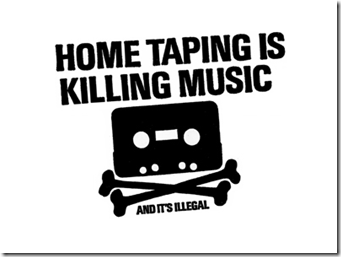 There is a familiar pattern to this. Each time a technology shift occurs in the content delivery space, large publishers and media companies cry about the threat of piracy, and that the sky is falling. Remember how Home Taping was going to kill music (“and it’s illegal”)?

How about when recordable CD’s became publicly available? This was going to end the music industry.

With the advent of the internet, the game changed on media publishers, first and most visibly for the music industry. Napster made possible the ability to share your music collection far and wide. More importantly, you didn’t have to buy an entire album to get the one song you wanted by an artist. While the wide-scale distribution of content-for-nothing via Napster and it’s subsequent imitators in reality did represent copyright infringement and piracy, it also demonstrated a new business model for the internet era. Unfortunately, the record companies’ and publisher’s reaction was not to recognize which way the wind was blowing and adapt. Instead, they resorted to tried and true tactics (not really) of “lawyering up”, using lawsuits, threats of lawsuits, and scare tactics in an attempt to restore the status quo. Instead of seizing the moment, instead of becoming early adopters and profiting handsomely, the Recording Industry Association of America (RIAA) reacted in a protectionist fashion, to its own detriment.

As it turned out, Apple recognized the potential of the new business model, and dragged the music industry kicking and screaming into the internet content delivery market. iTunes demonstrated that the majority will pay for legal downloadable content, provided an adequate, user-friendly mechanism to do so. Millions of paid downloads later, both Apple and subsequently Amazon have demonstrated that on-line delivery of paid-for digital music is not only viable, but highly profitable.

By the end of the first decade in the new millennium, delivery of high-definition streaming video has become not just a reality, but a fact of life. From humble beginnings in 2001, Netflix has amassed nearly 25 million subscribers, with an average growth of 2.4 million new subscribers per quarter through most of 2010 and 2011. While the company has since lost subscribers due to a series of marketing blunders, the demand for streaming video content delivery, and the willingness of the masses to pay for it are clear. At 25 million subscribers, Netflix currently has more subscribers than any single cable service provider including Comcast.

Think the internet is going to be the place where your video content comes from over the next decade?

Print media is lagging behind audio and video in achieving a profitable digital presence. But the decline in readership of “old-fashioned” paper magazines and newspapers, combined with the rise of digital readers such as the Kindle, Nook, and of course, the iPad show which way the wind is blowing here as well. In May of 2009, eMarketer reported that “nearly 20 million eReaders were expected to be in consumer hands” by the end of 2011, and that 12% of adults will have an eReader of some type or another. And of course, who can forget that on December 26th 2009, Amazon announced that for the first time, sales of Kindle books exceeded that of physical books.

Now, as the U.S. Congress attempts to pass some extraordinarily bad legislation in the form of SOPA (“Stop Online Piracy Act”) and the US Senate does the same with PIPA  (“ProtectIP” Act), we stand at a precipice. For the first time, American legislators are actively considering passing into law an Act or Acts which will radically change the internet as we know it forever. Either of these proposed pieces of legislation represent the first step in a process by

which Corporate America will attempt to seize control of the internet in much the same way it did the radio broadcast market, and subsequently, the broadcast television spectrum.

As things sit right now, at 10:42 PM Central Time, a day of “protest” by major internet sites such as Wikipedia, Reddit, and others appears to have rattled the cage of our fearless leaders in D.C. Support for SOPA and PIPA has been evaporating throughout the day.

Don’t worry. They’ll be back.

Plus ça change, plus c’est la même chose (The more things change, the more they stay the same) . . .

With billions of dollars on the line, and the evaporation of historical distribution mechanisms for print, music, and visual media, the large powerhouses of the entertainment industry are not going to sit idly by while the free-as-in-beer internet replaces the money machine. SOPA and PIPA are likely only the opening salvos in a war by which the media companies do their ham-fisted worst to seize control of the internet, to the exclusion of the layman.

Can you imagine a day in which you might need to apply for a license to host a website? Or a day in which the dominance of a small group of mega-corporations on the web infrastructure is so great that there are no avenues for entry at the ground level?

This may seem like paranoid thinking, when we examine the web as it is today. But take a look back. The internet is rapidly supplanting a multitude of industries which remain, to varying degrees, entrenched in an antiquated business model predicated on dominance through regulation. Television. Telecom. Audio recording, publishing and copyright. Print media. The players in these industries are not going to go quietly into the night. Instead they will, in the coming years, bring the full war chest to the table, starting with our elected officials (you know, the path of least resistance, right?).

It is our hope that the White House and the Congress will call on those who intend to stage this “blackout” to stop the hyperbole and PR stunts and engage in meaningful efforts to combat piracy.”

– (Former) Senator Chris Dodd, CEO of the Motion Picture Association of America, in response to planned protest of SOPA/PIPA

Imagine that! A former US Senator, now heading one of the largest lobbying groups in the country, is accusing the tech industry of engaging in “PR stunts” and hyperbole. I can only chuckle at the irony.

The thinking of big industry, and its attitude towards the rest of the internet community, could not be more effectively demonstrated than by this release (former) Senator Dodd from January 17th, the day before the “blackouts”:

If the connected community that is the world-wide-web does not succeed in preventing government encroachment and regulation, we face the very real threat of an internet which more closely resembles the “big three” of radio and television networks than the free information super-highway envisioned by its creators. SOPA and PIPA are bad, and they will likely die in the chambers of the Congress and the Senate. But SOPA and PIPA are only the beginning.

Congressional Support for SOPA/PIPA – A chart by Pro Publica showing who supports and opposes the measures. Interestingly, in the wake of today’s (January 18th, 2012) internet “blackout” by a number of major internet sites (including Wikipedia), the balance on this chart has tipped dramatically since last night as legislators flee a “sinking ship”.

SOPA is a red herring by Adam Curry – Interesting commentary makes the case that SOPA and PIPA are small-potatoes compared to changes being made to the Domain Naming system itself, and that the privacy aspect of the internet will be compromised forever.

Senate Copyright Bill Loses Key Supporters – Forbes Magazine, following the rush of former supporters (and several original co-sponsors) of the SOPA/PIPA legislation as they backpedal in an early election-season rush to please voters.

Whose Idea was This, Anyway?