As noted in Routing Basics in ASP.NET MVC, routing in ASP.NET Web API is functionally very similar to the standard MVC routing. Understanding the MVC routing model will provide most of what you need to know to leverage that knowledge against the Web API framework, so long as you keep in mind the key differences between the two.

The differences between the two are largely dictated by the different consumption models driving each type of application.

IMPORANT NOTE: This post covers the most basic and fundamental concepts of routing as applied to the ASP.NET Web API framework. The target audience are those with little or no familiarity with routing in general, or who may be looking to understand the most basic differences between routing in ASP.NET MVC and Web API.

If you have little to no knowledge of MVC routing, you may want to review my post on MVC routing basics first.

In my next post, having covered the fundamentals, I will examine route customization.

Because the Web API grew (in part) out of the efforts of the ASP.NET MVC team, and because the default Web API project template in Visual Studio is bundled up inside an MVC application, it is easy to think that the Web API framework is some kind of subset of the MVC framework. In fact, the two inter-operate together very well, but that is by design. They are, in fact, separate frameworks which adhere to some common architectural patterns.

Instead of paraphrasing the overview of Web API and the architectural goals of the project, I will let the MVC team do so, because honestly, they know better than I do! from the most helpful book Professional ASP.NET MVC 4

authored by (mostly) the MVC team:

The Web API team went to great lengths to try to allow you to leverage your existing ASP.NET experience with controllers, actions, filters, model binders, dependency injection, and the like. Many of these same concepts appear in Web API in very similar forms, which make applications that combine MVC and Web API seem very well integrated.”

As noted above, one of the key differences between MVC and Web API is that Web API returns an appropriate representation of the model object as a result. A related difference is that Web API performs content type negotiation in response to incoming requests, and attempts to return the proper content type (JSON in response to an incoming request specifying JSON as the preferred content resource representation, for example).

Suffice it to say that Web API is an effort to create a mechanism for the efficient exchange of data and other content using HTTP. This effort is reflected in the architecture of the framework, and results in some of the differences in routing between the two frameworks.

The default Visual Studio Web API project template is rather large, as it incorporates a complete MVC project as well. The resulting project has some pretty cool features, including automatic documentation for the API you build (that is the purpose of the MVC site contained in the project), but also presents a rather bloated project file, with a large number of folders and dependencies.

NOTE: To see how to create a stripped-down Web API project template in Visual Studio, see Creating a Clean, Minimal-Footprint ASP.NET WebAPI Project with VS 2012 and ASP.NET MVC 4

As with a standard MVC project, the route configuration is called from the Global.asx file. However, in this standard Web API project, there exists both a RouteConfig class, and a WebApiConfig class, both in the App_Start folder:

Global.asx File and the WebApiConfig File in a Typical MVC Project: 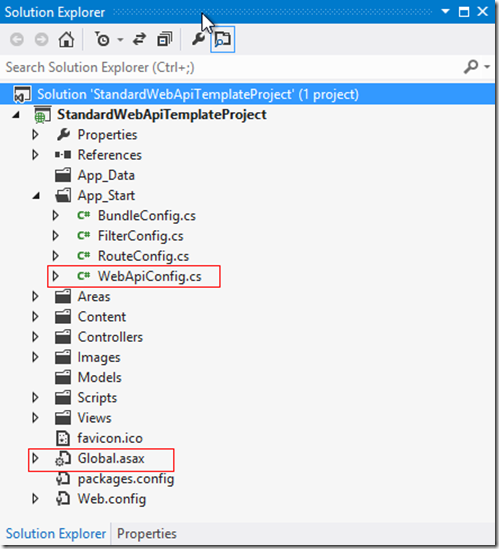 The RouteConfig.cs file here is the same as in any MVC project, and sets up routes for the MVC framework. The WebApiConfig.cs file is where our Web API routing configuration happens. However, if we open the file, it looks pretty familiar:

There are a few important differences here, though. First, notice that in the using statements at the top of the file, there are no references to System.Web.Mvc but instead, we find a reference to System.Web.Http. That’s because the Web API team re-created the routing functionality in a library with no dependencies on ASP.NET or MVC. Also notice that instead of calling Routes.MapRoutes as in the MVC RouteConfig class, we instead call Config.Routes.MapHttpRoutes.

And, as we can see, the default route template for Web API looks a little different.

How Routing Works for Web API

Unlike ASP.NET MVC, the Web API routing convention routes incoming requests to a specific controller, but by default simply matches the HTTP verb of the request to an action method whose name begins with that verb. Recall the default MVC route configuration:

In contrast, the default Web API route template looks like this:

The literal api at the beginning of the Web API route template above makes it distinct from the standard MVC route. Also, it is a good convention to include as part of an API route a segment that lets the consumer know they are accessing an API instead of a standard site.

Also notice that unlike the familiar MVC route template, the Web API template does not specify an {action} route parameter. This is because, as we mentioned earlier, the Web API framework will by default map incoming requests to the appropriate action based upon the HTTP verb of the request.

Of particular note, however, are the default method names (the example above is what is created as part of the default VS 2012 project template). Again, without specifying a specific method using an {action} route parameter, the Web API framework determines the appropriate route based on the HTTP verb of the incoming request, and calls the proper method accordingly.

The following incoming URL, included as part of an HTTP GET message, would map to the first Get() method as defined in the controller above:

Example URL With No ID Parameter

Similarly, this URL, also as part of an HTTP GET request, would map to the second Get(id) method:

We could, however, modify our controller thusly, and the routing would still work without modification:

Modifications to the ValuesController Class:

Note that we retained the HTTP action verb as a prefix to all of our method names. Under these circumstances, the unmodified route parameter will still work just fine. When per convention, no {action} route parameter is specified, the Web API framework again appends the “Controller” suffix to the value provided for the {controller} parameter, and then scans the project for a suitably named class (in this case, one which derives from ApiController).

Once the proper controller class is selected, the framework examines the HTTP action verb of the request, and searches the class for method names with a matching prefix.

In order to determine the proper method, the framework then examines the additional URL parameters and attempts to match them with method arguments by name (case insensitive). The method with the most matching arguments will be selected.

An item to note here. Unlike in MVC, in Web API complex types are not allowed as part of the URL. Complex types must be placed in the body of the HTTP message. Also, there can be one, and only one such complex type in the message body.

In evaluating parameter matches against method arguments, any complex types and URL query strings are disregarded when searching for a match.

We can modify our default Web API route to include an {action} route parameter, in which case selection will occur similar to that in MVC. However, action methods defined on our controller still need to include the proper HTTP action verb prefix, and incoming URLs must use the full method name.

If we modify our default route thusly, adding an {action} parameter:

To see how this works, consider the incoming URL:

This will no longer work. If we wish to make a request of our modified ValuesController now, we would need to submit:

Review of the Basics for Web API Routing

That was Pretty Darn Basic. What Next?

The above represents a very simple overview of the Web API routing basics, focusing on the default configurations and conventions. In the next post we will examine more advanced routing considerations, and route customization.